Driving in the United Arab Emirates 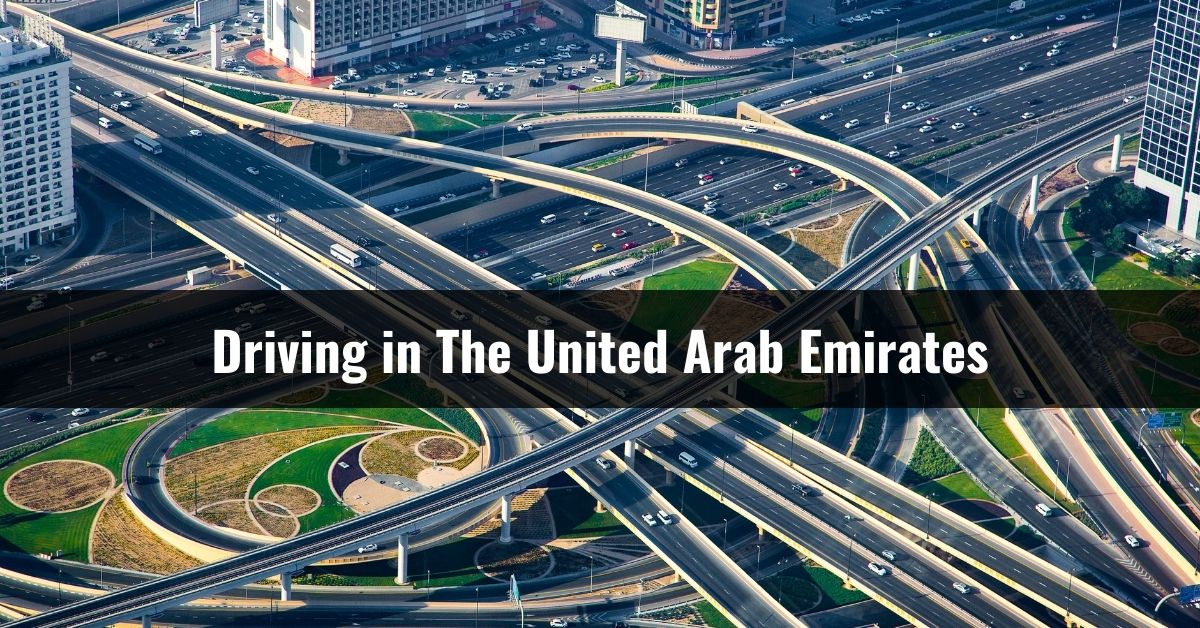 Are you wondering what it is like driving in the United Arab Emirates?

UAE is known for its high-end lifestyle, luxurious cars, and the beautiful sand dunes of the desert.

However, the scorching heat of the desert makes it unbearable to walk under the sun. Even riding a bike is a big deal in the UAE because of the heat. So, most people prefer driving a car for commuting. It is more comfortable and safer than the other options.

Although there are public commutes available, if you want to beat the slow traffic, driving in the United Arab Emirates is the best option. Moreover, UAE has the cheapest oil, so you don’t need to worry about the fuel cost.

What is it like driving in the United Arab Emirates?

When driving in the UAE, remember that you are driving on the right-hand side of the road with the driver’s seat located on the left. City driving is typically fast and furious here between lanes.

If it’s rush hour, for example, you might find yourself riding at a complete standstill or even making your way over to another lane completely signaled by a flashing “kharma”!

However, outside of city surroundings, many adventures await in desert conditions with sand dunes and/or camels present on some routes. The good news is that fuel is inexpensive and readily available at most stations scattered across both Abu Dhabi and Dubai.

As of 2016, there were roughly 26.6 cars for every 1,000 people in the UAE, according to statistics from the Roads and Transport Authority (RTA) in Dubai. And today’s report says, that there is 1 car for every 2 residents in the UAE.

It is important to note that most employers will provide employees with a car on top of their salary.

Who is allowed to drive a car in the UAE?

The legal driving age in the United Arab Emirates is 18 years. If a tourist possesses a valid license from their home country, they may drive a car for as long as their visas last.

However, if an expatriate does not possess a license from their home country, they must immediately obtain a temporary UAE driving permit and then apply for permission to exchange their national license for one from the U.A.E.

The best way to ensure a smooth and speedy transfer of your documents is if you organize things so that everything you need is together in one place before taking a trip to your local RTA branch. It’s recommended that you gather:

If your driver’s license is from a country that is not mentioned above, the steps required to legally drive in the UAE can be more complicated.

If this is the case and you are living in Dubai or Abu Dhabi, you have to get your RTA driving license by passing some lessons and tests issued by the authority.

Having this sort of RTA driving license will enable you to drive through the UAE as a valid one anywhere in GCC countries (Gulf Cooperation Council).

The card-sized licenses are given upon successful completion of these exams, and they should carry a photo, full name, nationality, date of issue and expiration date, class of vehicle, plus the expiry date.

Those who had an original non-citizen driver’s license can easily renew it within six months after they were granted residence status.

Car Maintenance and registration in the UAE

Are you planning to import your car into the UAE (United Arab Emirates)? Then you will first have to have a residence permit. You will also need a vehicle clearance certificate if the car is right-hand drive or older than ten years. The vehicle must have the right paperwork to be allowed in.

Renewing your car registration in the UAE

Occasionally you’ll need to go to the RTA center and re-register your car. Officials inspect both the exterior and interior of the vehicle, check for roadworthiness, and collect their registration fees for another year.

All this takes place on-site while you stand in long lines with your ID, old registration card, inspection report, and eventually said renewal certificate proving that you’ve paid all of your driving fees. The whole process costs around AED 200.

Driving costs in the UAE

Obviously, maintenance and driving costs depend on the type of car you own. Sources estimate that a medium-sized saloon, such as a Toyota Corolla, which is the most common car on the UAE’s roads, it will cost around AED 18,000.

you will have to take your vehicle in for an inspection each year, which costs roughly AED 550 for an annual registration and safety test. You should also be prepared to pay 5% import tax, plus insurance plus shipping charges (if needed).

Driving rules and penalties in the UAE

The first and most important rule of the road in the UAE is that, upon entering any vehicle, you put on a seatbelt. This applies both to your driver and your co-passengers in the backseat for a multitude of reasons, one being that it helps keep you safe during an accident.

As driving is on the right, you overtake on the left-hand side. That said, many large roads in the UAE are freeways, so you can overtake on either side.

As a business owner in the UAE, it’s important to understand that there are consequences when breaking the law. If you were caught drinking any amount of alcohol while operating a vehicle in the UAE, you could face one month or more in jail or, alternatively, an AED 20,000 to 30,000 fine.

Drinking while driving is something that is not tolerated by local authorities at all, and there are zero-tolerance policies overseeing alcohol consumption.

Road signs in the UAE

The United Arab Emirates is often easy to navigate because the road signs are both in English and Arabic. The UAE follows the standards of Great Britain, meaning the majority of travelers can easily find a sign that correlates with road signage in their home country.

Traffic information in the UAE

While the UAE has a wide, modern road network for its size, and it was put in place to help ease congestion on city roads, there are many cars which means that during peak hours, things might get slower than usual.

When the roads are particularly packed with vehicles, it can take anywhere between 10-25 minutes more just to go past one particular junction due to limited lanes.

Areas such as Sheikh Zayed Road and Al Barsha in Dubai, Salam Street in Abu Dhabi, and the road between Dubai and Sharjah are among the busiest spots of them all – especially when school is out, and families pack into their cars at pickup time!

Parking in the UAE

The UAE, home to vibrant cityscapes like Dubai and Abu Dhabi, is dotted with thousands of parking lots that cater to the needs of residents, businesses, and leisure-goers alike.

Most parking facilities can be differentiated across emirates (with the exception of parking for residential buildings), but what most people don’t know about all these spots is that free parking spaces can be found every weekend, such as on Fridays or during public holidays like Eid.

Prices for parking in the non-commercial area are AED 2.5 per hour, AED 5 per two hours, or AED 10 per three hours. Prepaid cards can be purchased in any increment starting at AED 50.

Road accidents and breakdowns in the UAE

The statistics released in the first quarter of 2019 were dire for UAE. In the last five years, forty-two people have died every day on UAE’s roads. The majority of the victims were aged between 18 and 30.

The bad news is that one person has died every three hours on UAE’s roads. The good news is that researchers found out that half as many accidents happened in March as compared to January this year, indicating efforts are being made to bring down traffic collisions and fatalities related to them in more recent months.

What to do if your car breaks down in the UAE?

According to modern safety regulations, wearing seat belts in your vehicle is mandatory. There are many reasons why it makes sense to always wear a seat belt while driving or riding in a car. It not only keeps you safe while traveling, but it also greatly helps reduce the severity of injuries from accidents without them. Moreover, you must always get your car periodically serviced and maintained by professionals to avoid sudden breakdowns in the middle of the city.

If your car breaks down all of a sudden, it would be best to get in touch with a professional or a local car recovery and pickup agency. Give them a call and drop your location precisely so that they could quickly send help.

With a little caution and maintenance, your experience of driving in the United Arab Emirates should be flawless. Moreover, the oil is cheap, so you can even drive luxury cars. But, make sure that you abide by the road safety rules, regardless of what you are driving.